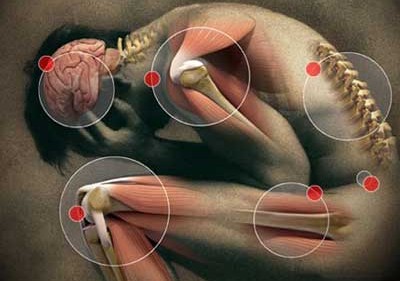 Symptoms sometimes begin after a physical trauma, surgery, infection or significant psychological stress. In other cases, symptoms gradually accumulate over time with no single triggering event.

Women are much more likely to develop fibromyalgia than are men. Many people who have fibromyalgia also have tension headaches, temporomandibular joint (TMJ) disorders, irritable bowel syndrome, anxiety and depression.

While there is no cure for fibromyalgia, a variety of medications can help control symptoms. Exercise, relaxation and stress-reduction measures also may help.

Symptoms of fibromyalgia include:

Other problems. Many people who have fibromyalgia also may experience depression, headaches, and pain or cramping in the lower abdomen.

Researchers believe repeated nerve stimulation causes the brains of people with fibromyalgia to change. This change involves an abnormal increase in levels of certain chemicals in the brain that signal pain (neurotransmitters). In addition, the brain’s pain receptors seem to develop a sort of memory of the pain and become more sensitive, meaning they can overreact to pain signals.

Dr. Rob sees new patients in Ohio and Utah. Only one visit is necessary to perform a comprehensive history, interview, and education. Follow up evaluations, adjustments and balancing of hormones are done by phone or written communications and a return visit to Dr. Rob is not necessary. Ongoing testing and adjustment is mandatory and performed through a laboratory convenient to your home.

In addition to the Ohio office, Dr. Rob sees new patients in Salt Lake City, Utah. Salt Lake City appointments can be made by calling the main office number 937-350-5527 for information.