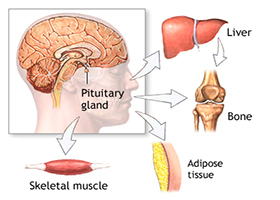 Human Growth hormone (hGH) is a hormone, which was discovered in 1956. It was originally felt to have as its principle action the regulation of growth in children to cause them to grow to adult height. About 30 years ago, it was discovered that adults with deficient hGH compared to their peers have an increased incidence of premature heart disease, diabetes, hypertension, strokes and osteoporosis. hGH has been FDA approved for use in adults with hGH deficiency since 1996. It has been used in adults in Europe since 1983.

hGH is a naturally occurring hormone which is produced in the pituitary gland and it makes sense to replace it when the individual is extremely deficient and when he has undergone an endocrine evaluation to rule out for the cause for his hGH deficiency, especially if it might be correctable without the need for hGH therapy. Furthermore, it is essential that the patient undergo a growth hormone stimulation test to document that he is indeed deficient.

There has been much hype about hGH primarily because it has been abused by non-hGH deficient individuals who have used it for cosmetic or bodybuilding purposes. This is a dangerous and inappropriate use for growth hormone. These harmful effects which can occur with excessive doses should not adversely influence hGH deficient patients against taking hGH. Any hormone which is used in excess in inappropriate patients has the potential for harm. Hormones are very powerful substances and should never be used solely for cosmetic purposes.

Over the past ten years, there has been a myriad of advertisements on radio, TV and magazines regarding over the counter products, which purport to increase growth hormone levels without the need for prescription hGH. Many of my patients have tried these products before coming to see me or have asked permission to try them and I have not found a single product, which was effective in a person who was truly hGH deficient by formal endocrine testing.

hGH is an essential hormone of the endocrine system, which should be replaced only if the patient is truly deficient on formal endocrine testing. When given by an experienced physician in prescribing hGH, it is well tolerated and can significantly improve quality of life.